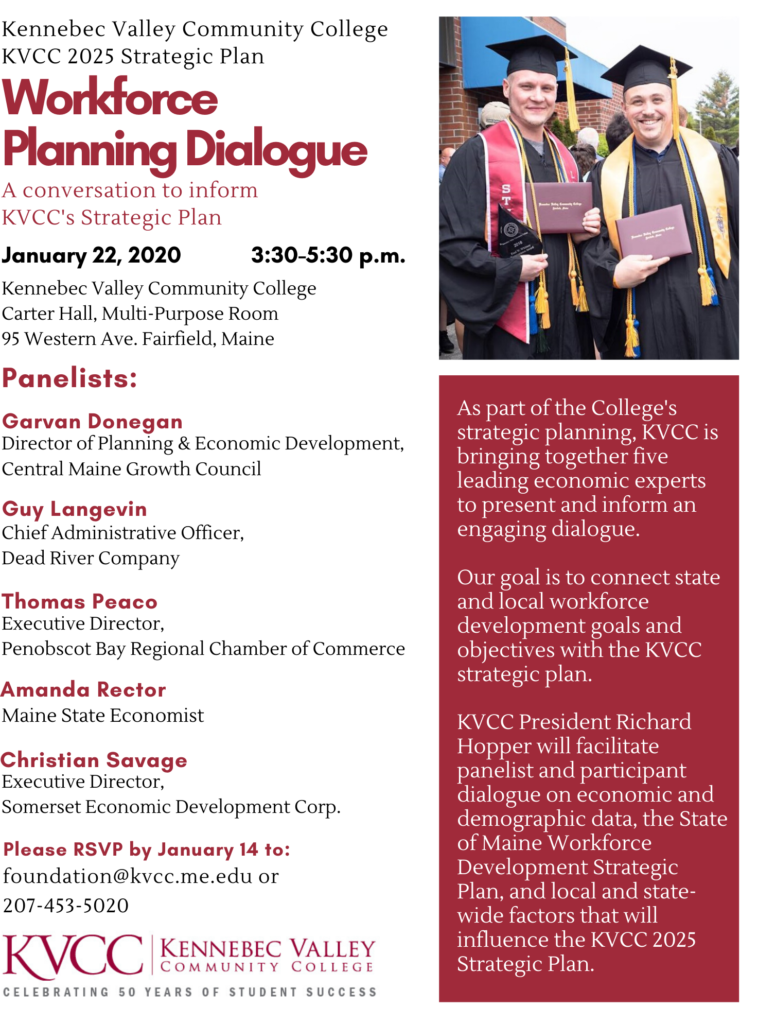 He is a Maine native and earned his B.A. from Eckerd College in Saint Petersburg, FL in 2008, earned a M.A. (MCPD) in Community Planning and Development from the Muskie School of Public Service at the University of Southern Maine, and attended the Loeb-Sullivan Graduate School of International Business & Logistics at Maine Maritime Academy.

Langevin earned his bachelor’s degree from the University of Southern Maine and his master’s from the City University of New York. He is a United States Army veteran where he worked in Military Intelligence as a Cryptologic Linguist. Before joining Dead River Company, he worked in leadership roles at Hannaford Bros. Co. and Key Bank Corporation. Langevin currently serves as the Board Chair for the State Workforce Board, Maine and Company, and the MES Foundation. He also currently serves on the Board of Junior Achievement of Maine and the Advisory Board for Live + Work in Maine.

As Executive Director, Tom leads the fourth largest Chamber in the state with over 800 business and non-profit members in 27 municipalities within and bordering Knox County. He was honored as the 2018 Chamber Professional of the Year by the Maine State Chamber of Commerce in recognition for his positive contributions to the economic development and tourism promotion of the Camden-Rockland Region. Tom is also the President of the Midcoast Chamber Council and Treasurer of the Maine Association of Chamber of Commerce Executives.

He earned a BS in Business Administration from the University of Maine and has held executive leadership roles with Make-A-Wish Maine and the Boy Scouts of America.

As the State Economist for Maine, Amanda conducts ongoing analysis of Maine’s economic and demographic conditions to help inform policy decisions. Amanda is a member of the State of Maine’s Revenue Forecasting Committee and serves as the Governor’s liaison to the U. S. Census Bureau. She started working for the state in 2004 and has been State Economist since 2011.

She earned a BA in Economics from Wellesley College and her Master’s in Public Policy and Management from the Muskie School of Public Service at the University of Southern Maine. Amanda is originally from mid-coast Maine and now lives in Union with her family.

Christian was hired as Executive Director of Somerset Economic Development Corporation (SEDC) in March of 2018. He comes from a long line of entrepreneurs and has owned several of his own businesses. He has several years’ experience in program management, fundraising, event management, advocacy, networking and marketing. Helping businesses and organizations in Somerset County connect with resources, capital and the workforce they need to succeed is his primary focus. SEDC focuses on rural broadband expansion, workforce development, quality of place, micro-lending, grant writing and management, and business consulting.

Christian resides in Skowhegan with his wife Krista and their three children.

Richard assumed his post at KVCC in April 2013.  Over the past nearly seven years he has overseen major investments in College infrastructure and programming.  These include construction of the new 600-acre Harold Alfond Campus in Hinckley with state-of-the-art classrooms, laboratories, and the latest technology, including the KVCC Center for Science Education.  He has also overseen the implementation of several multi-million-dollar grants from the US Department of Labor that have transformed information technology, academic facilities, and programming.  Dr. Hopper has led the institution’s broad, consultative strategic planning process, culminating in the publication of KVCC-2020 that sets benchmarks and performance targets.  Under Dr. Hopper’s leadership the College has neutralized a significant structural budget deficit and revived connections to business and industry, focusing curricula and training efforts to better meet the current skills gap.  The College has also adjusted its enrollment management division to better face the state’s aging population and contracting demographic trend.  Stable enrollments have only been possible in the past years thanks to an increase in yield from 54% to 72% – meaning that in 2018 fully 72% of those admitted to KVCC chose to attend.  The academic structure of the College has also shifted from seven to 24 departments, creating increased leadership opportunities for faculty and enhancing the practice of shared governance.  KVCC now collects and publishes key performance and financial data in an annual KVCC Fact Book, helping the institution to become more strategic with evidence-based decision making.  KVCC was awarded its 10-year institutional accreditation in November 2018.  Dr. Hopper has also served as chair of external review panels to other colleges and universities in the US and abroad.  Since 2013 Kennebec Valley Community College has been ranked among the top 100 community colleges in the United States by the Aspen Institute.

Dr. Hopper’s earlier research and career focused on higher education worldwide with an emphasis on access and equity for the poor.  Prior to KVCC he was a Senior Education Specialist for the World Bank conducting analysis on education investments and reforms, overseeing lending operations in education, and leading technical assistance to governments worldwide for over 13 years.  Dr. Hopper has 34 years of professional experience in teaching, higher education administration, economics of education, and international development.  His formal academic training is in economics (George Washington University), international affairs (Geneva, Switzerland), and education economics and policy (Harvard University). In addition to his career at the World Bank, he has managed US higher education programs abroad, assisted in the establishment of new universities, and advised governments and individual institutions on investments, reforms, and labor market linkages.  From 2010-2011 he served as a Senior Education Analyst at the OECD in Paris, France overseeing a research program that analyzed 2009 PISA data of the highest performing and most rapidly improving education systems in the world.  He also supported the Aga Khan Foundation as Chief Academic Officer in 2011-2012 helping to launch the University of Central Asia (UCA) with remote mountain campuses in Kyrgyzstan, Kazakhstan, and Tajikistan.  As part of his graduate studies, Dr. Hopper was a Fulbright Scholar in Bangladesh, conducting research for one year in the office of Grameen Bank founder and subsequent Nobel laureate Muhammad Yunus.  He is a recognized expert in higher education governance, finance and quality assurance as well as the large-scale measurement of student learning outcomes.  Dr. Hopper is fluent in English, French, and Swiss German; he is proficient in Japanese.

Read More
Invest in students, faculty, and programs
Donate Now
Have Questions?
Contact Us
Your Future is Waiting.
Apply Now